I haven’t really got anything interesting to tell you so I’ll have to start thinking up sly ways to fill space.  I’ll start by answering your last letter I think.

Pause, while I go and get it.

That story about Mike and the Canadian girl went around the office and everyone thought it was dead comical.  So did I.  I wondered what on earth you were leading up to when I read it.  I found out.

After Carol and I spent all week planning how we could both manage to go to the Lambourne we both end up at the Winter Hall, East Ham.  Had a marvellous time.  Roger and Joan, friend and fiancée of Michael’s were there.  Michael asked me about Alan and I told him how long I had known him etc. and showed the photos I have.

Have many pages to fill but nothing to fill them because not much happens here.  No dancing because there aren’t many females in these ‘ere parts.  Still we have a fair ol’ time now and again.  Just as well really because that’s when the time really flies.

The news this week was the arrival of the Sabres of the Turkish Air Force.  Two squadrons flew in earlier this week.  They look ok but their formation flying was very ragged.  Must remember to drop a line to the Turkish Air Marshall about it. 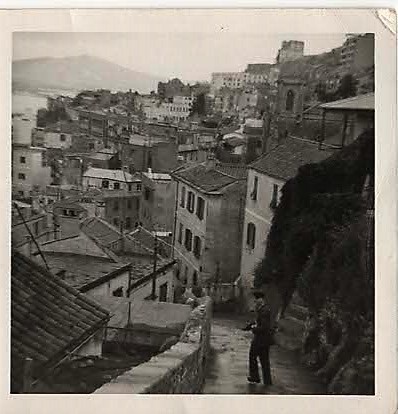 Right now on this hot dusty day the Platters are singing ‘Only You’.  Spring is in the air and all that.  Everything would be near perfect if only I was sitting in the back garden of ** Parsloes Avenue with you.

These past few days have been pretty good.  All us lads have been sun-bathing, playing cards, swigging beer and in general having an easy life.  Saturday we had a little game of football but the lads soon packed up because they thought it meant too much running around in the heat.

Who fancied Oxford for the Boat Race then?  it was a jolly good race though.  I even had visions of myself paying a visit to the Post Office for a postal order but I didn’t have to, thank goodness.  Y’know, I got paid Thursday and I’m skint again.  I don’t like pay days.  It come home to me how poor I really am, even though I’ve got a fistful of that green stuff.